12 February 2015: 2015 GMC ACADIA: Continual refinements greet the Acadia for 2015, offered in: SLE (with SLE-1 and SLE-2 trims), the SLT (with SLT-1 and SLT-2 trims) and the Denali models, with seven- or eight-passenger configurations. The Acadia features a 3.6-liter engine with direct injection technology that helps produce power similar to many V-8 engines. In the Acadia Denali, it is rated at 288 horsepower and 270 lb-ft of torque. In SLE and SLT models, the engine is rated at 281 horsepower and 266 lb-ft of torque. In all models, it is mated to the Hydra-Matic six-speed automatic transmission, with clutch-to-clutch shift operation for front- and all-wheel-drive vehicles. It also offers automatic grade braking, shift stabilization and precise shift control, as well as hill start assist. The available intelligent all-wheel-drive (AWD) system provides increased traction on slippery roads by actively managing the torque distribution between the front and rear axles, and delivers it to the wheels that have the best traction. With five passengers aboard, the Acadia holds 24.1 cu. ft. of cargo, which increases to 70.1 behind the second row, and up to 116.1 cu. ft. of gear behind first row. Acadia is the first vehicle on the market with GMC's new front center air bag system, and some of the popular options include rear-seat entertainment, a Dual SkyScape sunroof and a trailering package. Chicago Auto Show Fact: General Motors selected the 2012 Chicago Auto Show to unveil the new 2013 GMC Acadia crossover vehicle. 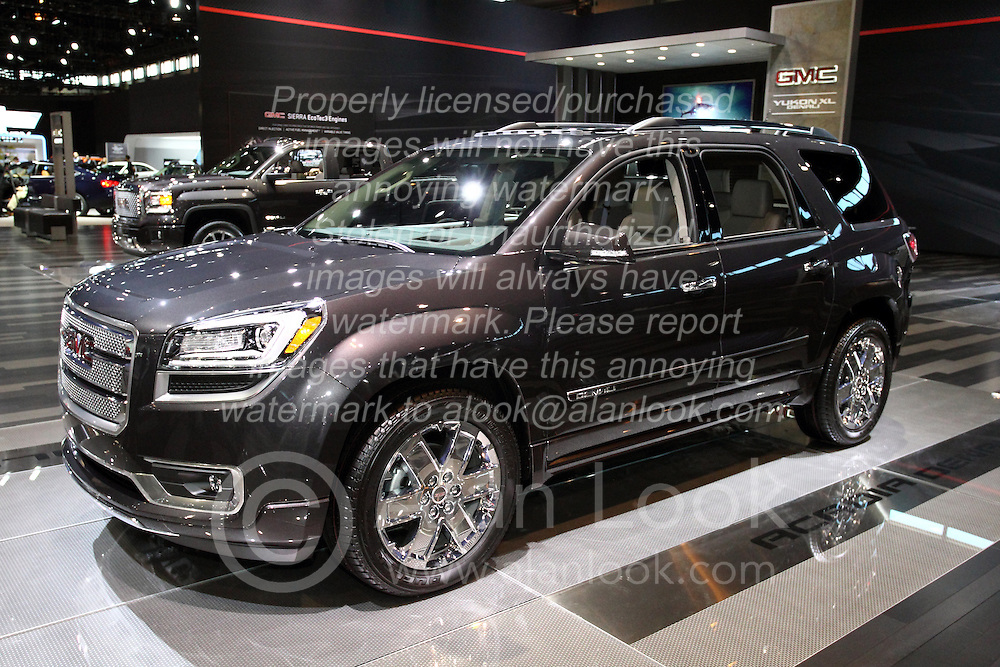